Fiddler on the Roof, Musical by Jerry Bock 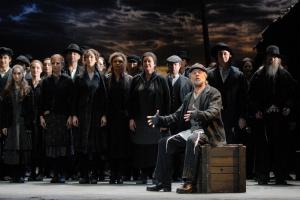 One of Broadway’s biggest hits is coming to town. Jerry Bock’s Fiddler on the Roof, which was premiered at New York’s Imperial Theatre on 22 September 1964, clocked up an astonishing 3,242 performances before its original run closed at the Broadway Theatre on 2 July 1972. It was, at the time, the longest-running show in the history of musical theatre.

Fiddler on the Roof is etched on the memory of many of us thanks to the glorious film version from 1971 (for which Bock’s librettist, Joseph Stein, wrote the screenplay) starring the legendary Topol in the title role of the beleaguered yet honourable Tevye.

Tevye, a poor Ukrainian milkman living in Anatevka, a Jewish community in Tsarist Russia, is struggling to provide for his wife, Golde, and their five daughters. Following tradition, he has tasked himself with finding suitable partners for his children to marry. However, rather than obey their mother and father’s wishes, his three eldest daughters, Tzeitel, Hodel and Chava, all choose husbands for themselves and Tevye finds himself torn between his daughters’ happiness and the beliefs he holds dear.

Tevye comes to terms with Tzeitel’s decision to marry Motel, a humble tailor, but when Hodel stubbornly refuses to give up Perchik, a political radical, and Chava falls in love with Fyedka, a Russian soldier, Tevye’s tolerance gives way to anger. He cannot accept Fyedka for a son-in-law and when Perchik is arrested and sent to Siberia he fears for Hodel’s safety. When the family is forced to leave their home and splits up to find their own fortunes, Tevye is forced to place his trust in the new men in his daughters’ lives.

A guaranteed tearjerker, Fiddler on the Roof, is one of those rare works that is sad, beautiful and uplifting at one and the same time. We understand both Tevye’s daughters’ desire to pursue true love but cannot help but sympathise with their father’s loss of the only world he has ever known. And Jerry Bock and Sheldon Harnick, who wrote the lyrics, have left us with a catalogue of songs that will stay with us forever.

A show you will never forget, Fiddler on the Roof comes to Vienna and the wonderful Volksoper Wien.