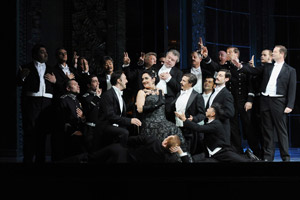 Franz Lehár’s light-hearted operetta, The Merry Widow, has been a crowd-pleaser ever since its premiere. After opening at the Theater an der Wien on 30 December 1905, The Merry Widow went on to tour Austria before travelling to Hamburg, Berlin and Budapest. It became an immediate international hit, including a stunningly popular first season in London. More than a hundred years later, the operetta continues to play to packed houses all over the world.

Baron Zeta is the ambassador in Paris of the imaginary Grand Duchy of Pontevedro; Hanna Glawari, a fantastically wealthy Pontevedrian widow. Fearful that she may re-marry a Frenchman, the Baron is desperate to act as matchmaker for Hanna and her former lover, Count Danilo, to ensure that her inherited fortune stays in Pontevedro and saves his country from ruin.

The plot quickly thickens. Danilo is simply not interested in re-igniting the affair while the Baron’s wife, Valencienne, has designs of her own on the French Count de Rosillon, Camille. The loss of a fan bearing the simple inscription ‘I love you’ and an amorous tryst in a summerhouse embroil all the characters in a farce which risks Danilo ending up as Valencienne’s escort and the Baron attempting to take Hanna for his own wife.

The Merry Widow is not a work to be taken seriously, and it is all the more enjoyable for it. Irreverent and glamorous, the operetta is one party after another, full of music, dancing and fun; even the Can-Can gets in on the act! There is neither death nor tragedy in The Merry Widow. Even with the political future of a whole nation at stake, it is the entertainment the story provides that matters.

Despite his wonderful gift for melody, Lehár made no pretence of creating great new music. Rather Lehár’s genius can be found in his homage to some of the best traditions of opera buffa, re-inventing them for his contemporaries while at one and the same time re-invigorating the fortunes of Viennese operetta. There can be no better venue for The Merry Widow than the Vienna Volksoper, the theatre that has championed the genre ever since it opened its doors to the public on the eve of the twentieth century.