A Night in Venice, Operetta by J. Strauss 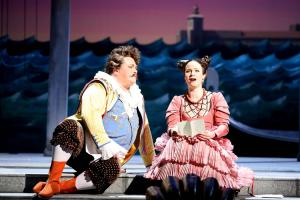 Johann Strauss the Younger’s invitation to spend a night in Venice is probably one of the most enticing experiences operetta has to offer. With his reputation already cemented as The Waltz King, it was perhaps inevitable that Strauss would go on to enjoy similar success writing for musical theatre.

By the time A Night in Venice was premiered in Berlin at the Neues Friedrich Wilhelm Städtisches Theater (later known as the Woltersdorff-Theater) on 3 October 1883, Strauss had hit upon a formula that never failed to delight audiences wherever his works were performed.

The Carnival of Venice and a masked ball are the backdrop for a comedy that exploits operetta’s delight in mistaken identity to the full. The Duke of Urbino and his retinue have come to town. The Duke, an unscrupulous lothario, has set his sights on Barbara, the wife of a local senator, Bartolomeo Delacqua.

The senator hires a gondolier to whisk his wife away from the Duke’s prying eyes, only for her to run off for an amorous liaison of her own with her husband’s nephew, Enrico. When the Duke’s barber and accomplice, Caramello, pays off the gondolier to take his place so that he can deliver the senator’s wife to his employer, little does he know that his own neglected girlfriend, Annina, has already taken her place. When Bartolomeo Delacqua arrives at the ball with his own ‘Barbara’ on his arm, this time impersonated by his cook Ciboletta, the protagonists’ deceptions unravel before their eyes and the farce is complete.

Strauss would not have made any pretence of offering anything more than an entertainment to his devoted followers. But that would do a disservice to Friedrich Zell and Richard Genée who wrote the libretti and lyrics for so much of Strauss’ uplifting music. In A Night in Venice, it is those lower down the social pecking order who win the day, using the art of disguise to improve their status in the world. One suspects that nineteenth century audiences would have enjoyed watching the servants usurp their masters by taking their places at the ball every bit as much as we do today.

Now this superb comedy of errors comes to the stage of the Wiener Volksoper.