The Land of Smiles, Operetta by F. Lehár 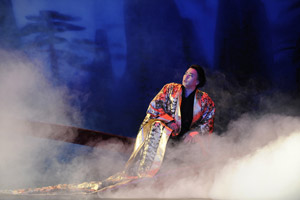 Whatever happens, just keep smiling! This positive stereotype about Chinese culture inspired the romantic operetta Das Land des Lächelns (or The Land of Smiles in English) by the Austro-Hungarian master of the genre Franz Lehár. It is one of the composer’s later stage works that underwent a massive revision before it achieved its deserved success. Unlike many of Lehár’s previous works, it lacks a completely happy ending, opting instead for a bittersweet coda that made the operetta even more life-like and exciting. At Volksoper Wien, Das Land des Lächelns is sure to put a smile on your face, too!

Lehár’s first version of the operetta was titled The Yellow Jacket, but already at its premiere in early 1923 it was apparent that it would not win audiences’ hearts. The composer thus set to rework it, and the new and final operetta, now called Das Land des Lächelns, had a triumphant inaugural performance at Berlin’s Metropol Theater on 10 October 1929. Without a doubt, part of the success of the revised performance was due to the massive presence and remarkable voice of the leading man Richard Tauber whose tenor parts take centre stage in a number of Lehár’s operettas. In this one, keep an eye and an ear out for ‘Dein ist mein ganzes Herz’, one of the most memorable solo numbers in the composer’s catalogue.

The plot of Das Land des Lächelns plays between Vienna and Peking in 1912. Countess Lisa marries Prince Sou-Chong and joins him in his homeland, but the local customs soon get the better of her. Little by little, their love fades and bitter conflict ensues. Meanwhile the prince’s sister, Princess Mi, begins a romance with the Austrian official Gustav von Pottenstein. Their love takes them back to Vienna. Disillusioned and out of love, Lisa joins them and returns home as well. Back in Peking, Prince Sou-Chong has no choice but to abide by his country’s customs and keep smiling despite the double blow of losing his wife and sister to the West. Full of mixed emotion and fine music, Das Land des Lächelns impresses on the stage of Volksoper Wien!