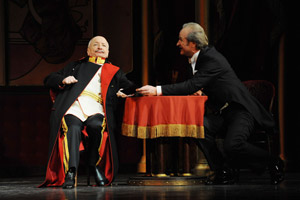 Emmerich Kálmán, together with his fellow Hungarian Franz Lehár, was responsible for the second heyday of Viennese operetta in the early decades of the twentieth century. However, despite making an indispensable contribution to what is known as the genre’s silver age, The Gypsy Princess was out of step with the mores of the time.

Premiered at the Johann Strauss Theater in Vienna on 17 November 1915, Kálmán created something of a scandal, combining comedy with political commentary to mock the attitudes of the aristocracy at a time when the social order was being rent asunder. The First World War had been raging for well over a year and Europe was in turmoil.

The starlet Sylva Varescu is performing her last show at the Orpheum cabaret theatre before departing for America. Edwin, the Prince of Lippert-Weylersheim, has fallen in love with the singer, but his parents simply will not stand for a liaison between their son and a woman so far below him in society. When Sylva learns that Edwin is engaged to be married to Countess Anastasia, she reneges on a promise to stay in Europe and sets off for the States with Boni, a patron of the theatre.

On her return, she attends a party, pretending to be Boni’s wife, which has been organised to formally announce Edwin’s engagement to the Countess. Now, ironically, she would be considered an acceptable partner for Edwin if she divorces Boni. Sylva cannot stomach such hypocrisy and rejects the proposal; Edwin should accept her for what she is or not at all. When it is revealed that Edwin’s mother was once an entertainer herself, Kálmán’s conceit is complete as Edwin’s father swallows his pride and accepts that his daughter-in-law will be a gypsy princess after all.

Kálmán paints a fascinating figure: he was a composer who had found favour in both Germany and Russia at a time when Europe was in turmoil; his music was admired in both countries. Despite being offered a safe haven by the German government shortly before the start of the Second World War, he chose to emigrate to the United States. His works were subsequently banned in wartime Germany, but that of course did not affect his popularity in Russia; The Gypsy Princess was adapted for Russian cinema and went on to become one of the most successful films of the Soviet era.

Now Kálmán’s delightful satire on the upper classes returns to the Austrian capital at the Volksoper Wien.