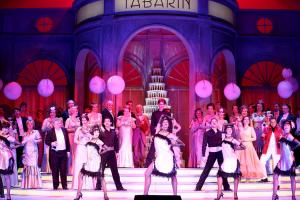 Emmerich Kálmán’s irresistible Countess Maritza is a must-see work for all who love Viennese operetta. Premiered in the Austrian capital at the Theater an der Wien on 28 February 1924, Countess Maritza captures the exuberance of an age that has come to be known as the first feel-good decade of the last century: The Roaring Twenties.

Béla Török, the new manager on Countess Maritza’s country estate, is in fact Count Tassilo Endrödy-Wittenburg. Count Tassilo has fallen on hard times and taken a job as the only means of providing a dowry for his sister Lisa.

Countess Maritza, struggling to fend off an ever-growing swarm of suitors, invents a fiancé, Baron Koloman Zsupán, drawn from Johann Strauss’ operetta, The Gypsy Baron. Of course, the characters do not know that they are in a work of fiction too: cue Baron Zsupán’s entrance and Kálmán’s comedy really begins to take off. Lisa falls for Zsupán, and Maritza, initially drawn to her imaginary lover now that he has appeared in the flesh, begins to harbour feelings for Tassilo.

The arrival of Prince Populescu only serves to confuse matters even further as he mistakenly assumes that Tassilo and Lisa are lovers, and accuses Tassilo of taking on a disguise to trick Maritza out of her money. Maritza, who by now is head over heels in love with Tassilo, dismisses him from her service, but almost immediately wishes she could rescind her decision. Is the note she hands him a reference for a new employer or something else?

The entertainment in Countess Maritza coupled with Kálmán’s beautiful melodies - of which Tassilo’s wonderful aria “Komm, Zigány” (“Come, Gypsies”) is just one example - is absolutely glorious. It is an operetta that is completely accessible yet tinged with an authenticity that comes from the composer’s intimate knowledge of Hungarian dance and folk song.

Kálmán, in his private life however, cuts a more melancholy figure than his music would suggest. The story of Countess Maritza, with its indispensable happy ending, could well be seen as offering a catharsis for Kálmán, given his own personal experience of his father’s bankruptcy when he himself was still a child.

Now this joyous work plays in Vienna once again at the Wiener Volksoper.