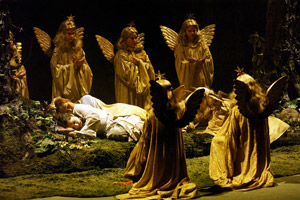 The backstory of how Engelbert Humperdinck came to write Hansel and Gretel is as enchanting as the opera itself. His sister, Adelheid Wette, had asked Humperdinck to set four songs, for which she had written the words, based on the Grimm Brothers’ fairy-tale, to music for her children’s entertainment. So delighted were both with the results that they developed their ideas into a full-scale opera.

Championed by the young Richard Strauss, who conducted the work at its premiere, Hansel and Gretel arrived just in time for the Christmas of 1893, playing for the first time on the 23rd of December at the Hoftheater in Weimar, now more commonly known as the German National Theatre. An outstanding success from the outset, revivals of the opera have often opened on the anniversary of its inaugural performance.

Humperdinck and Wette’s Hansel and Gretel is a gentler version of the original fantasy. Chased away by their mother from home for failing to complete their chores, Hansel and Gretel run into the forest to pick strawberries. Succumbing to sleep, they wake up to discover a house built out of all manner of sweets and treats, but which hides an evil inhabitant, a witch who lures children into her home to bake them into gingerbread. Hansel and Gretel have to use all their wits to escape the sorceress and free the other children in her store cupboard.

Wette’s libretto added a host of forest creatures to the tale, including angels, a sandman and a dew fairy. From our first meeting with these delightful creatures, one suspects, in this Hansel and Gretel, that the children will enjoy their protection and that things will not end well for the crone.

Humperdinck served what must have been a most astonishing apprenticeship, working as Richard Wagner's assistant in Bayreuth on the great master’s final opera, Parsifal. Clearly influenced by his famous compatriot in his use of melody, harmony and leitmotif, at times Hansel and Gretel could almost be the children’s opera that Wagner never wrote.

Now it is the turn of the Volksoper Wien to present this charming work which never fails to enchant audiences, young and old alike.