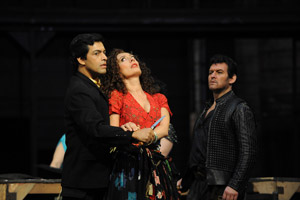 Carmen includes two of opera’s most popular arias, the Habanera and the Toreador song, so well-known that even those who have still to enjoy Georges Bizet’s magnificent final opera in full can hum their tunes.

Yet Bizet himself was never to know the great success that Carmen would become. Blazing a trail for the pioneers of Italian verismo that would follow him, Bizet’s work was such a departure from the traditions of French opera that at first Parisian audiences of the late nineteenth century simply failed to understand it; they could neither accept an opera that championed what they considered the debauched world of an underclass, unable to rein in its passions, nor entertain a piece of theatre whose heroine was a confident, sensual and, in their view, immoral gypsy woman, a character the likes of which had never been seen before.

As a consequence, Carmen’s initial run was little short of disastrous. Premiered at the Opéra-Comique in Paris on 3 March 1875, by the time of Bizet’s premature death exactly three months later, Carmen was playing to half-empty houses. But as tastes changed, so the opera’s fortunes rose for it to become rightly recognised as one of the great works of the genre. After he died, many of his contemporaries were quick to applaud his achievements with no less a figure than Tchaikovsky declaring that he had written a masterpiece.

Don José, a soldier, gives in to his infatuation with Carmen and, in the process, abandons Micaëla, the young girl he is engaged to marry. Carmen toys with Don José and then falls for Escamillo, a bullfighter who has become the new talk of the town. Unable to take his mind off Carmen, Don José decides that she will either be his or nobody’s.

Bizet’s bombastic interplay between his central characters and the ensembles that pay court to them is so modern in feel that his approach to composition would not be out of place in today’s musical theatre. Now his music is set to fill the Volksoper Vienna with some of the most memorable melodies ever written.