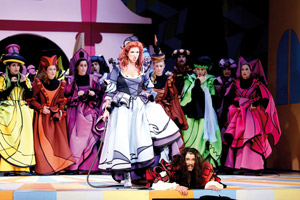 The musical Kiss Me, Kate, the collaboration between composer and lyricist Cole Porter and writers Samuel and Bella Spewack, seems destined for greatness nowadays, but the circumstances at the time were less than ideal. Porter’s previous two musicals were commercial and critical failures, and the Spewacks were allegedly on the brink of divorce. However, when Broadway producer Arnold Saint-Subber approached the writer duo with his idea of turning William Shakespeare’s classic play The Taming of the Shrew into a musical, they took the offer and completed the book at an astounding speed. For music and lyrics, Bella insisted they enlist Cole Porter, against all odds. So Kiss Me, Kate was born – Porter’s widely recognised masterpiece that now returns to the Vienna Volksoper.

Saint-Subber supposedly got the idea for Kiss Me, Kate while working as a stagehand on the theatre production of The Taming of the Shrew in 1935. Alfred Lunt and Lynn Fontanne, the actors in the lead roles and real-life husband and wife, went at each other with such fierceness both on- and off-stage that they left a mark in the future Broadway producer’s mind. The Spewacks reimagined this conflict in musical form. On stage, the action follows Fred Graham, director, producer and leading man as he clashes with his on-stage partner and ex-wife Lilli Vanessi.

To match the alterations between incisiveness and tenderness, Cole Porter displayed the wide range of his talent. The score of Kiss Me, Kate is rich and full of carefully crafted song and dance elements. Shakespeare’s sometimes crude and naughty humour finds perfect reflection in songs like ‘I Hate Men’ or ‘Too Darn Hot’, while ‘Were Thine That Special Face’ and ‘So In Love’ harmonise with the kinder, gentler emotions the main characters experience.

Kiss Me, Kate had a pre-Broadway trial run at Philadelphia’s Shubert Theater starting on 2 December 1948 before it moved to the New Century Theater in New York City on 30 December 1948 for its official, smash-hit premiere. Volksoper Wien stages yet another highly anticipated revival.