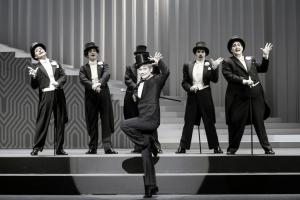 Art frequently imitates life; but how often does it happen the other way round? Extraordinarily, some of the writers and actors, including the leading lady in the original production of Ralph Benatzky’s Axel at Heaven’s Gate (Axel an der Himmelstür), in many ways became in their own lives the characters they played on the stage.

Zarah Leander in the role of Hollywood diva, Gloria Mills, caused such a sensation at the operetta’s premiere in Vienna on 1 September 1936 that she went on to become a film star in her own right; Benatzky left Austria courtesy of a contract from MGM ahead of the outbreak of the Second World War; the squabbling producers in the fiction of the operetta are themselves Viennese exiles; an element of self-parody that he no doubt reflected upon with a wry smile once he had arrived in America himself.

The Axel of the story is a reporter desperate to secure an interview with Mills that will make or break his career, but who finds that all his efforts are thwarted by both the actress and the shenanigans of the studio moguls. The plot, and particularly the songs, which include a blues (“Gebundene Hände”), a tango (“Mein schönes Fräulein, gute Nacht”) and, most famously of all, yodelling (“In Holly-Holly-Hollywood“) hilariously send up any attempt we might make to carve out a career by riding on the coattails of others.

Benatzky drew his inspiration for Axel at Heaven’s Gate from the 1932 movie Grand Hotel and very much based his characterisation of Mills on Greta Garbo’s performance. It was this film that contained Garbo’s much-quoted line “I want to be alone”. Those watching Leander at the operetta’s debut at the Theater an der Wien immediately made the connection; furthermore they were astonished by her voice: a contralto in a genre where the heroines are invariably sopranos or mezzo sopranos.

Axel at Heaven’s Gate is much more than a period piece and well worth discovering as it makes its return to Vienna at the Volksoper Wien; indeed it is a work that offers a tantalising glimpse of what might have been had it not been for the war; one that might have seen Viennese operetta continue to prosper alongside the still young medium of cinema.