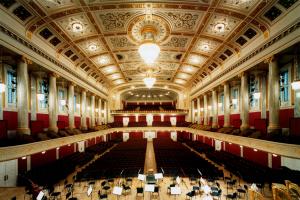 On 22 March 2017, the Wiener Konzerthaus plays host to the legendary José Carreras. His concert in Vienna is part of his Final World Tour, A Life in Music that, on its completion in July, will have taken in performances in all four corners of the globe.

With a career now in its sixth decade, Carreras himself has alluded to the pivotal moment in his life that began it all: when he saw Mario Lanza in the 1951 film, The Great Caruso. A very young Carreras would attempt to emulate his heroes, singing over and over again the melodies he had heard.

As a student, his principal mentors were Francisco Puig and Juan Ruax. With Ruax’s encouragement, Carreras’ breakthrough came when he played Flavio in Vincenzo Bellini’s Norma, at the Gran Teatre del Liceu in his native Barcelona, at the beginning of 1970. Sometimes lives turn on a moment of good fortune; the production also starred Montserrat Caballé as Norma. By the end of the year, an impressed Caballé had invited Carreras to join her, as Gennaro, in Gaetano Donizetti’s Lucrezia Borgia, again at the Liceu. International recognition swiftly followed with his London debut in 1971, again alongside Caballé, at the Royal Festival Hall in a concert version of Donizetti’s Maria Stuarda.

Carreras has sung more than sixty operatic roles, including many of the great parts written for tenor, notably several of Puccini's male leads (Caravadossi, Pinkerton and Rodolfo) as well as championing and recording many of Giuseppe Verdi’s lesser-known, early works (Un giorno di regno, I due Foscari, Il Corsaro, La battaglia di Legnano and Stiffelio).

After successfully overcoming leukaemia, Carreras famously joined Plácido Domingo and Luciano Pavarotti to form The Three Tenors in 1990, bringing the joy of opera and Neapolitan song to a completely new audience. Increasingly, Carreras gave recitals, but after more than a decade's absence from opera, he returned to live dramatic performance in 2014, to great acclaim, in the title role of Federico in Christian Kolonovits’ El Juez.

On the basis of his new album, released in October to accompany this tour, Carreras’ visit to Vienna promises to leave those who love his music in raptures; a wonderful retrospective of a life devoted to song by an artist considered by many to possess the purest tone ever to grace the musical stage.