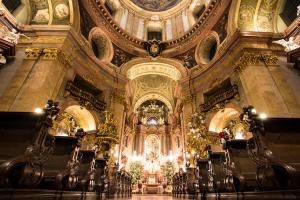 The beautiful Church of St. Peter in Vienna hosts a series of concerts dedicated to the great masters of classical music and performed by Classic Ensemble Vienna.

Made up of two violins, a cello and a double bass, this string quartet will take you on an hour long journey through Austria, Germany and Italy taking in the most beautiful works of European classical music. All four of the talented musicians that make up this ensemble have had international careers of repute before they formed to take up residence in the splendid Church of St. Peter in Vienna, where they regularly give concerts to the delight of music lovers.

The place that will serve as the backdrop for this concert series was not chosen by chance. Regarded as one of the most beautiful Baroque buildings in Vienna, St. Peter's Church (Peterskirche) is also a site loaded with history. It was built in the early eighteenth century on the foundations of an earlier fourth century church. This was one of the first churches to be built in the Austrian capital, at a time when Vienna was known as Vindobona. Therefore, Classic Ensemble Vienna could not choose a better place to interpret the great classics from the history of music.

Even if the programme is subject to some minor changes, it normally includes some of the most famous pieces drawn from the repertoires by Bach, Mozart, Beethoven and Vivaldi. You can discover, or rediscover, excerpts of such well known works as The Four Seasons by Antonio Vivaldi, Eine Kleine Nachtmusik by Wolfgang Amadeus Mozart or the orchestral suites by Johann Sebastian Bach.

Wielding their bows skilfully, the four musicians of Classic Ensemble Vienna will afford you an unforgettable evening in the heart of the capital of music.