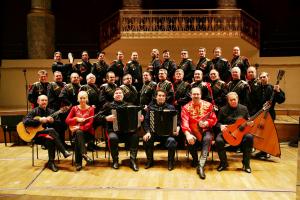 As it has done for the last two decades, the classic event of the Bolschoi Don Kosaken performing at Vienna's Konzerthaus will take place on 23rd December in 2019. This wonderful pre-Christmas concert will feature the superb male voice choir of the Bolschoi Don Kosaken, a traditional Russian and Ukrainian ensemble which mixes Cossack folk songs with the mysticism of sacred chants, especially those associated with the Christmas spirit. In addition, audience goers can expect many of the best-loved classical songs to be given the choir's distinctive interpretation. Despite the traditional nature of much of the music that will be sung, the choir move with the times and this concert will be accompanied by an evocative projection of images and special lighting effects in a stunning display.

The Bolschoi Don Kosaken have performed a range of Cossack influenced music for 35 years and continue to do so under their artistic director, Petja Houdjakov. Born in Rostov-upon-Don (Russia), Houdjakov became the youngest dancer and choreographer to gain widespread acclaim in the city of Sofia, before he moved to Dresden and Vienna. Under the direction of Houdjakov – who is also an excellent accordion player and singer of so-called 'forbidden songs' – the choir has developed the homogeneous nature of its voices, offering superbly skilful modulation and stunning contrasts in its musical interpretations.

Since it was founded by Sergej Jaroff, the choir's first director, the group has gained a well-deserved reputation with the public and music experts as well as from many positive reviews in the media. The choir has numerous prizes and diplomas to its name and, over the years, has built up a close friendship with many of the world’s most famous artists and concert houses, often contributing toward an improved understanding between the cultures of East and West.

Often wearing traditional garb and being accompanied by instruments such as balalaikas, the Bolschoi Don Kosaken return to the Great Hall of the Konzerthaus, a wonderful venue for a festive concert that will feature a great variety of music suited to all. The programme will include many of the popular highlights of previous performances along with Christmas carols and exciting dance routines. With the impressive multimedia projection, this concert is the perfect way of getting into the Christmas atmosphere in a musically spectacular event.